French Word of the Day: infroissable (en-fwa-sob-leh)- I have no idea what this means, but the washing machines flash this word when they decide to break. Translation websites claim it means “crease,” but that just makes no sense to me.

I went to Marseille and Aix-en-Provence this weekend, but as I still haven’t figured out how to load the pictures from my new camera onto my computer (seriously, how can it be that hard?!  I think it’s playing games with me), we’ll wait for that update.

I’ve been searching for laundry places by my foyer in the hopes that I’ll be able to find a machine that will work.  Of course, I haven’t been able to find any.  In my desperation (not REAL desperation as I’m awesome at washing things in the sink- but that’s time consuming), I bought coins for the foyer laundry machines today.

I walked in that room and knew right away that both machines were broken because they were flashing their “INFROISSABLE!!!!!” messages.  Yes kids, someone other than me broke the machines!

When I went to the management, they were a bit disbelieving.  They were like, “Are you suuuuuure they’re broken?  Maybe you just don’t understand the machines because you’re American.”

I have broken those machines enough times to know when they’re flashing the “I DON’T WORK!  DON’T TRY TO USE ME!” signs.  But I refrained from mentioning that.  I didn’t think it would make me very popular.

The guy came with me to the machines and tried to use them, then realizing they were in fact broken.  He gave me extra coins and was like, “Ah well, you’re SOL.  Better luck next time.”  I assume it will take a week for the machines to be put back in order, because this is France.

At least now I know that I can use the machines at any time of day.  (They originally told me not after 11 pm.)  3 am Saturday night washing machine party here I come!!!!

Today at work, we went for a 2 hour lunch because one of the interns is leaving.  I got coffee for the first time at a cafe.  Normally, I just buy the coffee in the vending machines at school because I’m in a rush.  Because this is France, it still tastes 5 thousand times better than Starbucks.

Coffee in cafes is expensive consider it’s roughly the size of my pinkie nail.  There’s about enough room for a single drop of coffee (even though this drop contains more caffeine than 87 cases of Mountain Dew… the French are a mystery).  As an apology for not giving you much, the cafe ALSO gives you a little cookie.

I don’t know if you can read the packet, but it says “Speculoos.”  It’s a biscuit that contains pepper, cinnamon, ginger, cloves, cardamom and nutmeg.  And also 8 thousand grams of sugar.  And fairy dust.

It’s the best thing ever after chocolate.  Someone decided that having it in cookie form wasn’t enough and turned it into a spread. 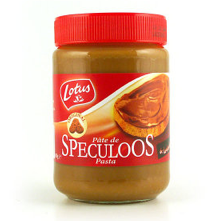 It’s like Nutella without the chocolate.  It’s gaining popularity, so maybe we’ll have it in the States in 10 years.  Everyone from last semester has been asking me to ship it to them.

Just keepin’ y’all current ahead of the curve.

Maybe in the next few days, I’ll write a fashion report so everyone can be in style too.  Spoiler: men, your pants are still too tight, and you still will not let go of the man purse thing.

Pain au chocolat count: 66 (I went to TOWN this weekend and had 6 mini pains au chocolat for breakfast, but we decided that 3 minis equal one big)